As I sit here with a fresh pile of snow being dumped on Toronto I realised that most of my recent posts have been a little light on markets and a little heavy on machine learning.  I am reluctant to let all those efforts go to waste so I thought we can use some of the work we have done on classification to see how it can be applied.

GS has been publishing their EQ-MOVE model for a few years now so I thought we can construct something similar in R.  The model attempts to model the probability of a 5% rally or drop one month in the future.  They use a multinomial logistic regression with 4 inputs:

My sample is shorter due to data availability.  GS estimates the model for the period 1988-2014.  I will use data from 1991-2014. The data is sampled on a monthly frequency.  Our multinomial model will be specified as:

In the above equations, NonEvent is defined as a monthly return that is within -/+5% range.  We can calculate the conditional probabilities from the specified log odds ratios as:

All we need to do is to define the probability of NonEvent.  Since the conditional probabilities must add up to one (a particular month’s return will be either less than -5%, more than 5% or in the range -5%<Return>5% ). Using this fact about probabilities and above two equations we can derive the following:

From all this you can see that all that needs to be done is for us to estimate 2 equations with 5 beta coefficients each.  Coefficients are estimated numerically using maximum likelihood estimation.  Lucky for us R already has all of this implemented in the nnet package with the multinom function.

We can now estimate the model.

Now we can check what attributes the fitted model object has and find the name for the fitted values and inspect them. 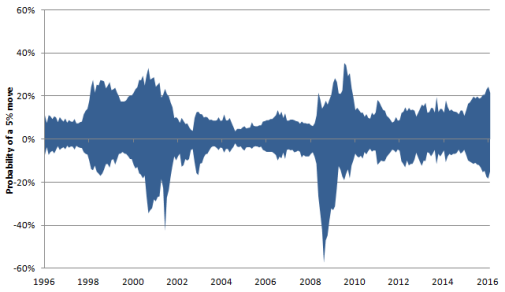 Finally, we can add two time series of 1month European digitals, a 105% call and 95% put.  Bloomberg has data going back to 2006.  Again, our results look similar. 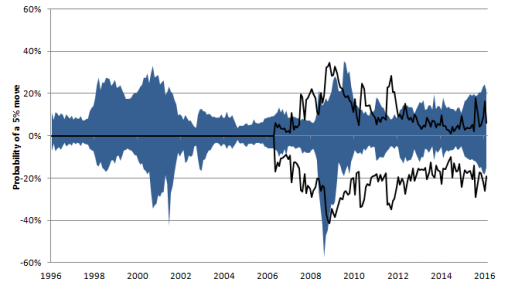